Elizabeth LaPensée, professor and game designer, created the game known as Thunderbird Strike. In an interview with author Jacob Dubé she explains what her game is about. She says that as “a big greenish-blue thunderbird a player can use its thunder to destroy vehicles and construction sites…or they can use the [thunder] to restore the local wolf, caribou, and buffalo populations. Since it’s impossible to lose in the game—only garner higher and higher scores— LaPensée said players can experience the game however they want. The game doesn’t judge you, she said” (Destroy Oil Pipelines as a Thunderbird in this New Video Game). After playing the game and thinking about her purpose I questioned what she meant by “the game doesn’t judge you.” In my opinion, the game does not judge the player because the player decides what they think is the best choice for environmental justice. Although the game does not judge the player’s choice it does cause the player to think carefully about their choices. 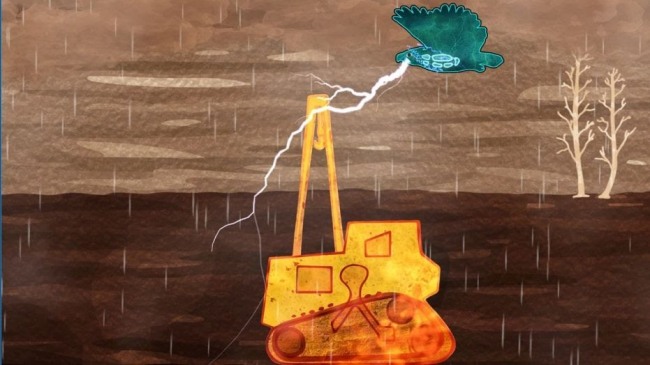 The first time I played the game I did not save any animals. I decided that I wanted to save the environment by destroying vehicles. I thought if there were no vehicles and construction sites there would be less harm done to the environment. Some may call this a practical approach, but the consequence is that the animals die along with my rampage. For example, while I am destroying the vehicles I lose so much lightning that I do not have enough to save animals. Thus, they continued to be deceased underground. The second time I played the game I decided to save the animals. This approach was also practical. However, this approach was problematic because the vehicles and construction sites were the cause of the problem. Even if I saved all the animals it does nothing for the environmental damage humans do as a society.  In both instances, I was struggling with what I believed to be the “right” choice. In addition, even when I did try to destroy vehicles and save animals I didn’t have enough lightning for both. Thus, I was practically forced to choose destroying, saving, a little bit of both or to do nothing.

As LaPensée points out, the game does not judge the player. However, what her game does is put the player in charge of their choices. When the player manages their own choices, they witness the consequences of that choice. For me, I struggled with the idea that I could not save all the animals or destroy all the vehicles and sites. I had to prioritize what I thought was most important. When this kind of thinking occurs in a game it really makes one think more about their choices. In other games the choices are judged so game developers practically make the choices for you.