Yesterday, BBC released an article stating that a code gang in China was arrested for the production of cheat programs. Specifically, these cheat codes were created for the game PlayerUnknown’s Battlegrounds (PUBG), allowing players to have a competitive advantage during gameplay. For those unfamiliar with PUBG, it is a multiplayer online battle royale game in which 100 players drop into the map, trying to gather weapons and equipment, with ultimate goal to be the last one standing. These 15 Chinese suspects were fined 30m yuan (nearly five million dollars!) for profiting from selling their cheat code programs, granting an unfair advantage to those who purchased the codes. This is a major problem as about half of the current PUBG players live in China. Therefore, it is likely that a high percentage of PUBG players have been going up against other players who already had an unfair edge on them. Some of the competitive advantages the program provided were: steadier and more accurate aiming, the ability to spot other players through walls, and ultimately, survive longer. The visuals below show some of the potential cheat codes used in the game. 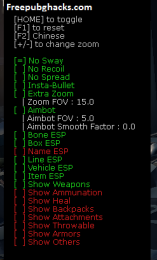 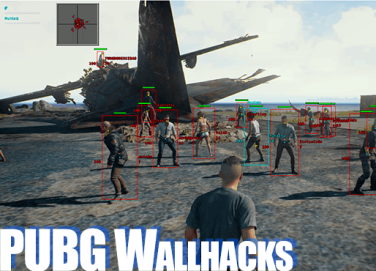 The picture on the left shows some potential hacks available to use in game, such as No Recoil and No Spread while shooting. The right picture shows how wall hack cheat codes are used, as the red boxes around the players are always visible, even when they are behind walls and buildings. Read more here to learn more about how these hacks are used in gameplay.

Sadly, the use of cheat codes in PUBG is not a new problem, as this article describes that cheating has been around since the initial release of the game. It blew my mind when I read that in the month of January alone, the game developers banned over 1 million accounts due to cheating! Clearly, the producers of the game prioritize fair gameplay, and will not hesitate to ban any player who fails to abide by the rules.

Finally, I want to connect this to the time in class when we talked about cheat codes and whether or not they are ethical/should be used. After reading these articles, I am fully onboard that the use of cheat codes is not ethical and can ruin games, as they create unfair advantages for certain players. I will end asking the same question – Are cheat codes ethical and should they be used in games?

One thought on “Recent News on Cheating in PUBG”